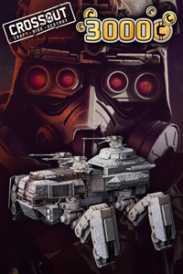 分享
如何在外国店里购买Xbox游戏？
How buy and activate Xbox Game as key ?

Parker's detachment was ambushed when returning from negotiations between the Brotherhood and Dawn's Children. To survive, he had to hide in the wasteland, eating spiders and grasshoppers, and moving around at night.
He managed to return, the squad's only survivor to report on what had happened. His report was classified, but had a great influence on further relations between the factions. Parker received a medal and a promotion, but he still could not rejoin the ranks of the Brotherhood.
At first people joked about his spider sense, but stopped when he, in fact, began to escape any trouble unscathed. And then people began to fear him and call him Spyder.
However, he supported this legend in every possible way, and even built a truck, looking like a giant spider. Parker grew more and more distant from his comrades, and now spends most of his time in wastelands.

Unique cabin: Epic rarity Steppe spider
Spyder drew a sketch shortly after returning from the mission that brought him notoriety. And the masters of the Brotherhood decided not to deny the hero, and they were curious to see what would happen.
And it turned out to be a surprisingly strong and comfortable design.

Unique armored vehicles presented in packs, are particularly well-balanced in their weapons, armor quality and speed in combat. To put the design in the garage, launch the game, open the blueprints menu, go to the "Packs" tab, select the required armored vehicle and click the "Load" button.

When you buy this pack, the number of parts that can be used to create vehicles increases to 60.

Also, the purchase of the pack gives the player early access to some structural details of the factions. These parts become available immediately upon purchase and are not re-issued once the appropriate reputation level is reached. Some parts are unique, and there can't be more than one of them. When purchasing multiple packs, such items are not duplicated.

Unique portraits are a great opportunity to stand out among the survivors.

Paint cans are a great chance to highlight your armored vehicle.

Coins are an in-game currency, that is used in the market for purchasing armored vehicle parts from other users and for paying rent for the part-producing faction workshops. Attention! When purchasing multiple packs, the coins stack!